Diet modification is very important in getting control of symptoms of GERD. Triggers for GERD can to some extent vary from patient to patient.
Tags: Baby Food • Eating for Health • Obesity
By Nimali Fernando, MD, MPH
Print
What is GERD?

Gastroesophageal Reflux (GER) is a backup of food and digestive acids from the stomach into the esophagus (the digestive tube that leads from the mouth to the stomach). The stomach contents are normally held down in the stomach by a thick muscular ring called the “Lower esophageal sphincter” (LES). If the sphincter relaxes then stomach acids are then able to flow backward into the esophagus, causing irritation and symptoms. Gastroesophageal Reflux Disease (GERD) is a more severe form of GER that may require treatment.

In Pediatrics, GER is often seen in babies under the age of 12 months, when the LES has a lower tone. This can lead to frequent spitting up, regurgitation, and fussiness. GER and GERD can present in school-aged children as well. Diet, genetics, and other factors can play a role in the development of GERD. In extreme cases, prolonged GER can lead to erosion or sores in the esophagus leading to bleeding or backup of acid into the respiratory system leading to cough, difficulty breathing, or pneumonia. 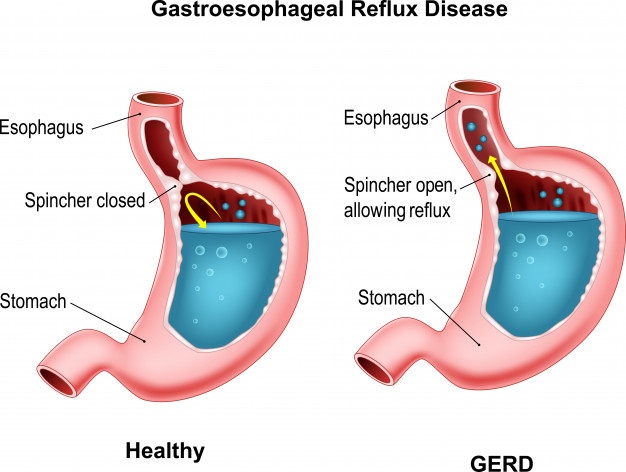 What are the symptoms of GERD?

How is GERD diagnosed?

Generally, doctors are able to diagnose GERD with a good patient history. Occasionally, other tests will be required to make the diagnosis when the history is not as clear. They may include:

Upper GI/Barium Swallow: This test uses barium, a chalky white liquid which is swallowed by the patient while a special series of X-rays is taken. This test is often used to identify other abnormalities in anatomy that may explain symptoms.

Endoscopy: This is a test performed by a specialist who inserts a small tube with a lighted camera. The camera can help visualize abnormalities of the lining of the esophagus, stomach, and even part of the small intestine and guide the specialist to take tissue samples of abnormal appearing areas.

Gastric emptying study: Occasionally this test is performed to determine if there is a delay in emptying of the stomach which contributes to GERD. The patient swallows food or drink mixed with a radioactive material that is photographed and timed as it travels through the GI tract.

pH monitoring: A thin tube is placed in the esophagus, and it monitors the pH while the patient goes home and records symptoms to see if reflux of stomach acid correlates with symptoms.

How is GERD Treated?

In babies, small frequent feeding can help with symptoms of GER. Keep babies upright for 20-30 minutes after feeding. Positioning on the belly or left side can help, but babies should ALWAYS be supervised to make sure they are breathing easily. Talk to your baby’s pediatrician to see if thickening milk might be an appropriate strategy to manage reflux. Your pediatrician may even prescribe a reflux medication (to reduce acid production) for babies with more severe GERD symptoms like failure to gain weight, extreme fussiness, or respiratory symptoms. For some breastfed with severe GERD, a trial of reducing foods like dairy in the mother's diet may also be suggested.

Children with GERD may be asked to modify the diet to avoid food that aggravates GERD. Diet modification is very important in getting control of symptoms of GERD. Triggers for GERD can to some extent vary from patient to patient. Below is a list of common triggers known to aggravate symptoms. Some of these foods may worsen symptoms because they are too acidic or irritating to the lower esophagus. Others may actually cause relaxation of the lower esophageal sphincter, therefore causing acid to splash up into the esophagus. Once GERD symptoms are under good control you may talk to your doctor about adding back some of these foods in moderation to your child's diet. In some cases, your doctor may also suggest medications for a child to reduce acid production from the stomach which may alleviate symptoms. Often these medications are used for a limited time until symptoms are more manageable.

foods that may trigger GERD symptoms 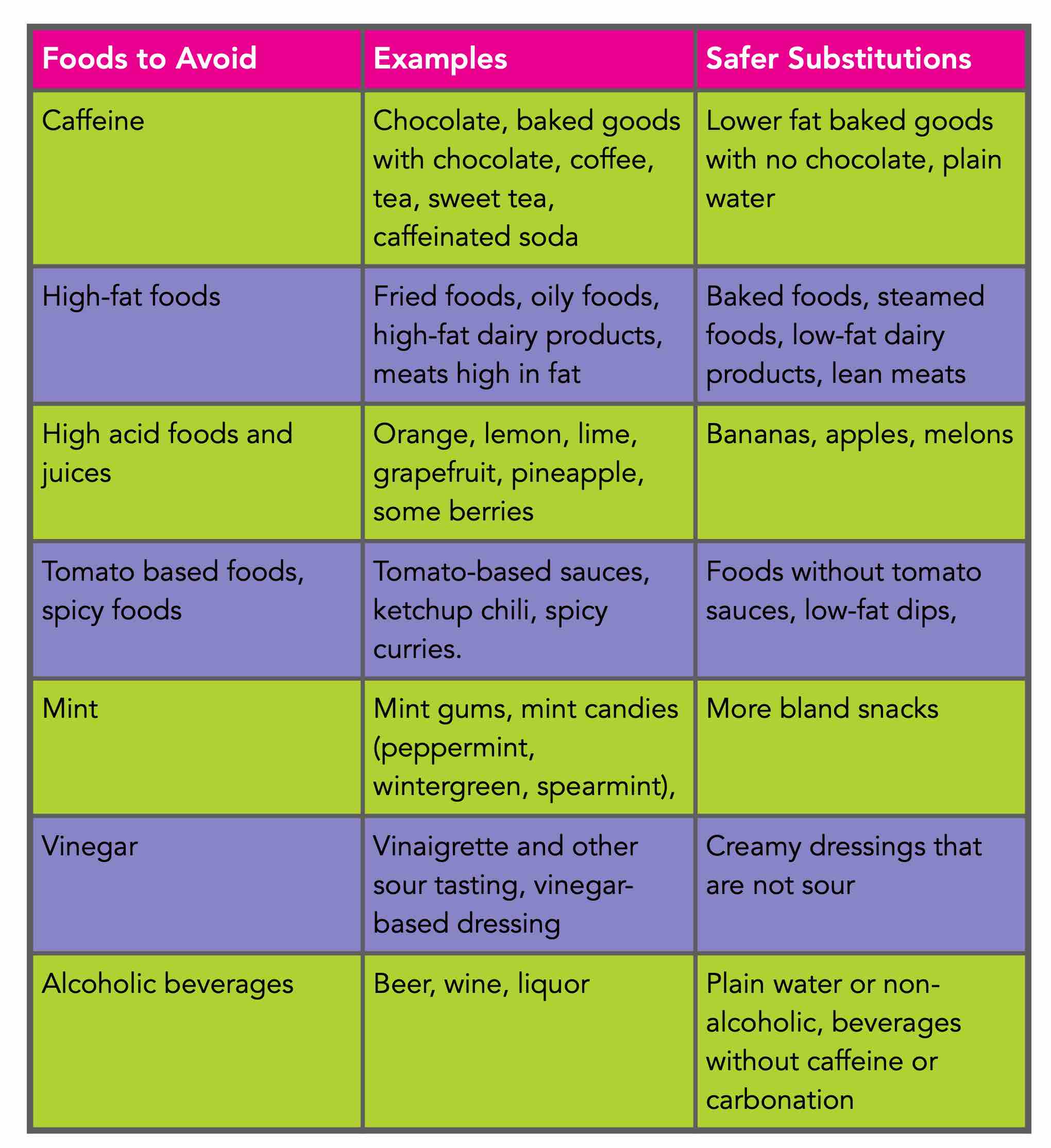 Once symptoms of GERD are under better control, patients may find they can return to many of these foods in moderation.

Eating before bedtime: Eating stimulates acid production, and lying down may bring that acid up into the lower esophagus, aggravating symptoms. Do not eat for about 2 hours before bedtime. Elevating the head of the bed may help as well.

View and Print the Handout 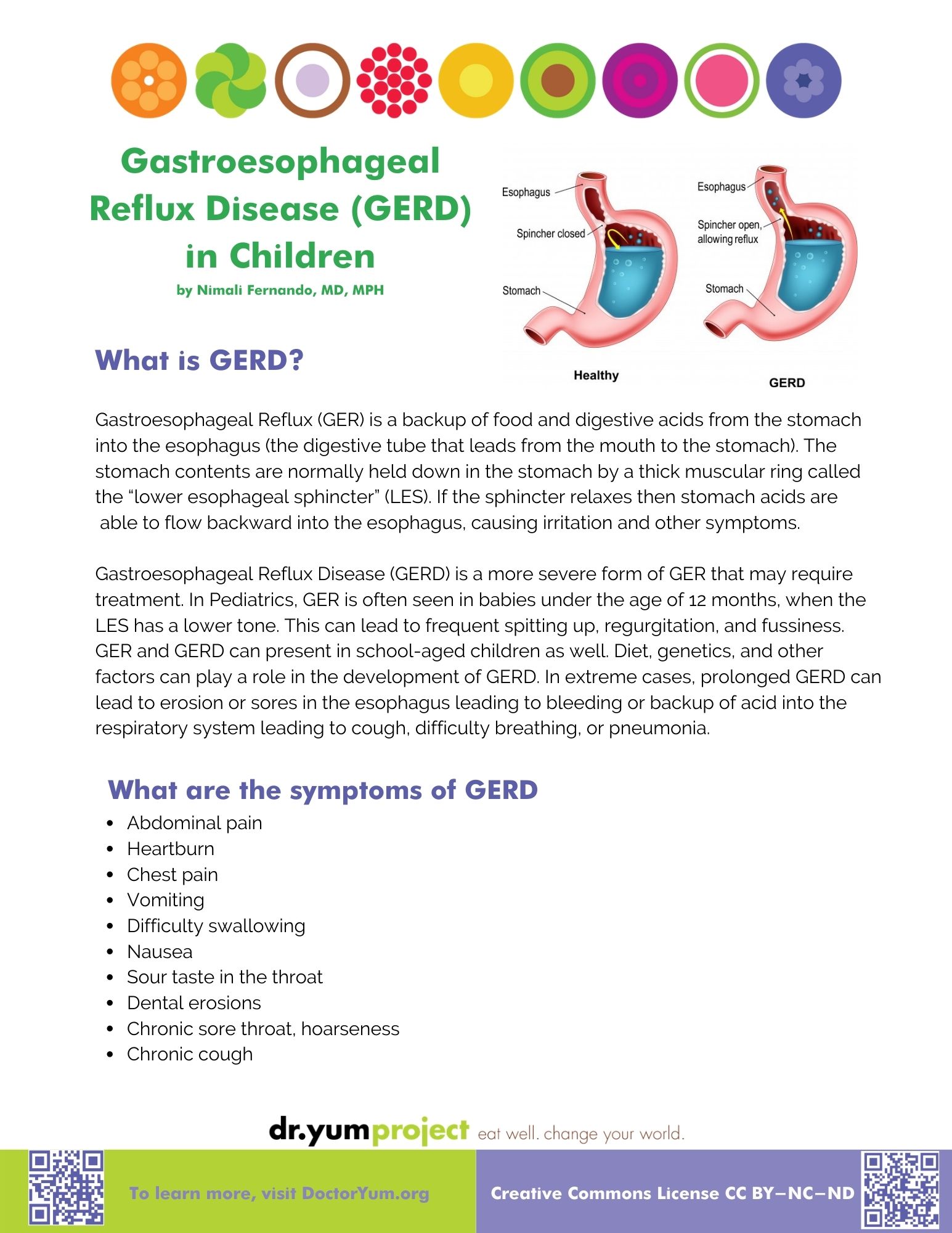